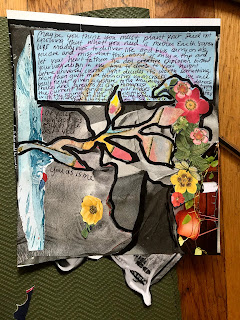 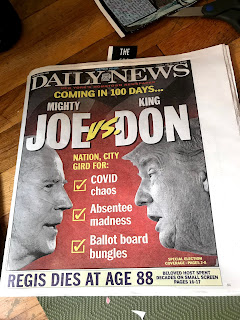 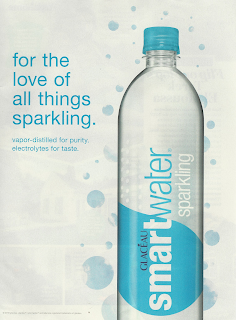 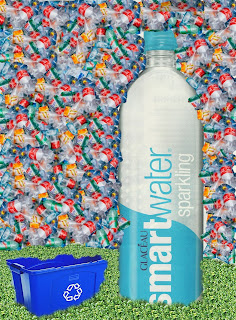 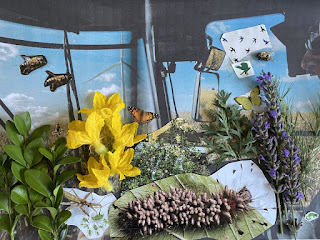 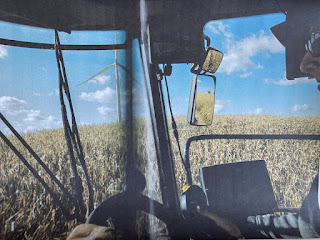 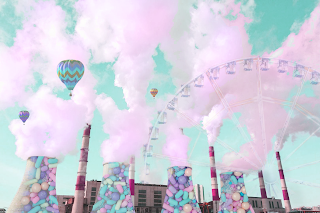 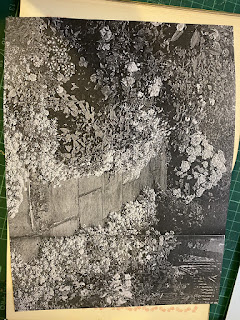 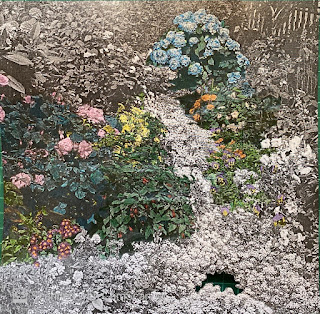 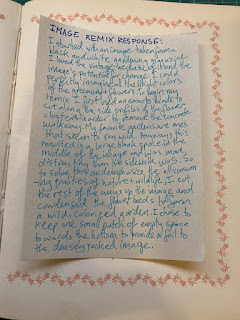 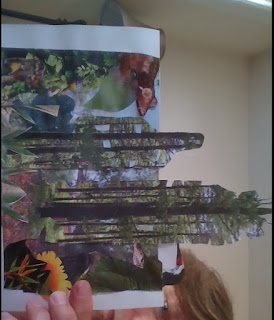 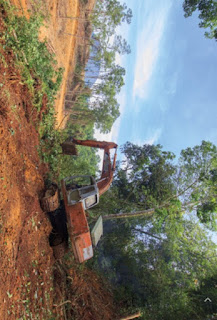 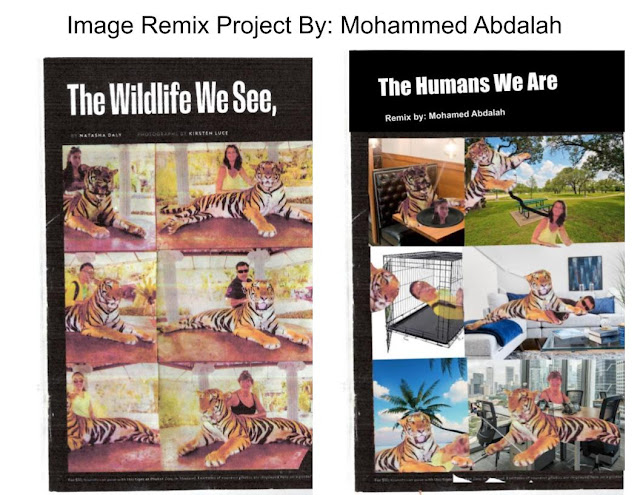 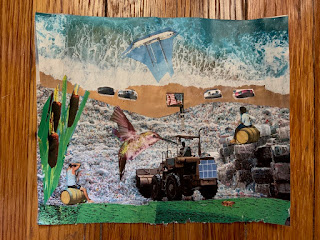 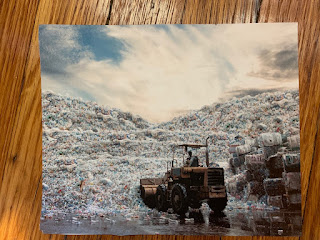 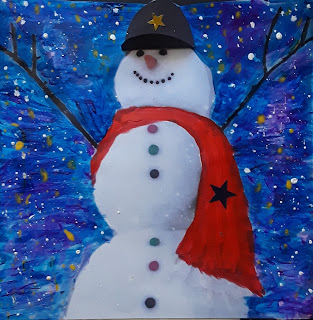 Posted by lesley environmental arts class at 8:12 AM No comments: 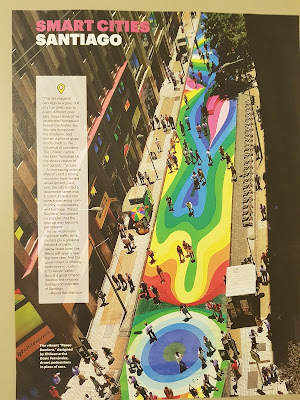 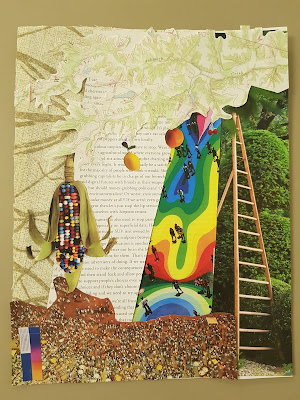 The original image I was presented with is an areal photo of a main walkway in the Chilean capital, Santiago.  The mural itself titled "Paseo Bandera," or "Walking Flag" in English, permits pedestrians to utilize the street for congregation and movement within the heart of the city.
When given the task to remix this image, I was intrigued by the fluidity of the mural within the linear confines of the street.  Expanding this concept into the natural world, I started exploring movement in nature and humankind's struggle for order.
My background utilizes the quadrilateral shape of the street in Santiago within my three other found images.  In each selected piece, I was looking for juxtaposition of curved and irregular lines, shapes, and forms in contrast to more linear and geometric elements.  In the far left, curving branches are woven by machine, line after line, to create the fabric.  Moving to the right of the image, not only is the text written in a linear fashion with straight and curved lines for letters, but the text itself discusses the environment, bio-technical advancements, capitalism, and government.  These paragraphs debate and inquire about both the natural world and human constructs.  The far right component of the background continues this, exemplifying the linearity of human creation and manipulation of the natural world within the symbol of a wooden ladder resting against a tailored green space.
Congregations of people along the beach group and wiggle like an ameba on the bottom left.  The rigidity of the line I created through their space creates a false sense of order within their formation, just as the street in Santiago does above.
I layered a small slice of another mural in a public space in France in the bottom left.  This juxtaposes with the street in Santiago, as the color is now on top of the people and is completely in order in color, shape, and composition.
I pulled this concept into my middle and foreground to draw upon man's manipulation of the natural world.  Produce hangs from a tree-like shape created by a topographic map.  Within the map, we see straight roads and purple patches indicating human-made alterations to the terrain since the map was printed only a few decades before.
The produce on the tree also indicates human intervention, as the naturalistic fruit varies drastically from the corn comprised of various pills for kernels.
My work reflects human ingenuity and the strive for control, uniformity, and perfection in the context of movement and progression.
Posted by lesley environmental arts class at 9:23 AM No comments:


My remix draws on the relationship between humans and nature through Mother Nature. She is a figure in several different cultures that embodies the natural world. The original image spoke to me because of the simplicity and beauty of the horse's profile, and I wanted to enhance this by bringing in a human aspect to help people connect. The remix features a side profile of mother nature in line with the horse, surrounded by flowers and with a golden branch crown. The swirls coming out of her mouth remind us that she is always speaking; through the ocean waves,  through the gentle breeze that ruffles fields of golden grain, through the fog that drifts in from the sea. Our current society has operated with the premise that each part of our world exists separate from one another, and we need to remember that we are all part of the same home, Earth. 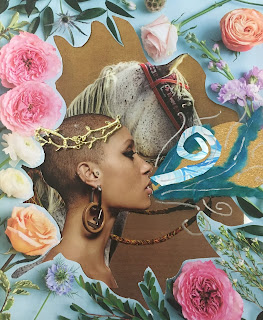 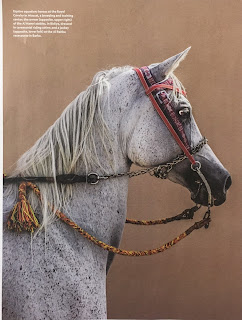 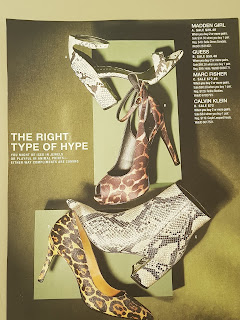 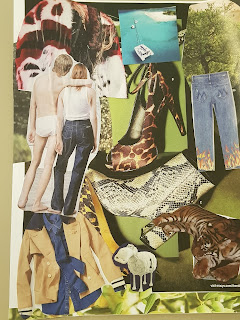 The first thing in this image that caught my eye was the multiple animal printed shoes. My first thought was: well, this is definitely not eco-friendly. I tried to find some animals from the magazines we had to address the issue of protecting animals.  By looking at these magazines, I noticed that there weren't many animals I could use but instead there were a lot of clothing images. This brought me a new idea that not wearing animal printed shoes is not the main point of wearing green, but instead choosing eco-friendly materials. Some of the eco-friendly clothing materials I can think of are linen, organic cotton, and silk. I also picked some denim because of the darker the color, the lesser use of bleaches in production. Purchasing dark color denim is a helpful way that we can do for water pollution. Apparels like the fur jacket and animal printed shoes do harm to animals. Paying attention to the materials is another way to protect our environment and ecosystem, for example consuming organic cotton sheets, linen pants instead of polyester pants, etc. Two people wearing in basics represent my personal opinion about some people's closets that there are no eco-friendly apparels except their undies. So think green, wear green. Let's start by looking at our closets and make some changes.

Posted by lesley environmental arts class at 9:03 AM No comments: 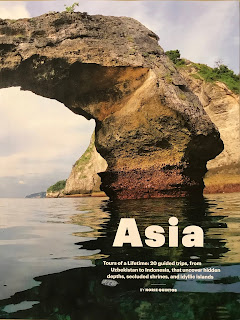 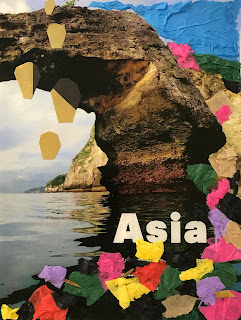 The idea of this remix media art project is to pull attention to the issue of "plastic pollution" caused by the lantern festival. The Pingxi district, located in New Taipei City, Taiwan, is well known for its Lantern Festival. People can release the sky lantern not only during the annual Lantern Festival time but also in the daily visit to Pinxi.

With more and more aware of our environmental issues nowadays, the environmentalist in Taiwan now trying to bring out the plastic pollution issue in the area. After people released the plastic lanterns with their beautiful wishes, it's not always land in a proper space. Sometimes the lantern will fall in the woods, sometimes into the ocean. It caused a severe environmental problem.

I chose the image form National Geographic Travel magazine, which has an Asia ocean scene with some trees on the side. I have used colorful tissue papers to express the plastic texture. On the contrary, I added some gold and shinning lanterns that represent how beautiful wishes can end up laying in the water or hanging on the tree. To bring up people's awareness of the responsibility of protecting our environment.

Posted by lesley environmental arts class at 8:58 AM No comments: 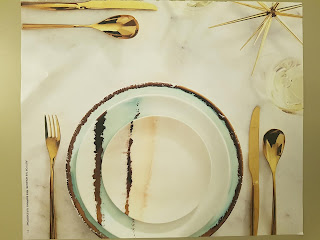 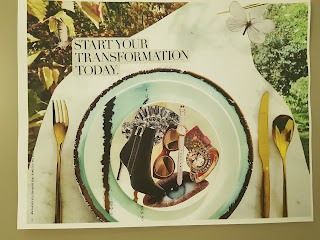 My piece is a juxtaposition between two worlds: nature and consumerism. I transform a dining room silverware set into clashing images of environments that cannot coexist mutually. We are to rid ourselves of our instincts to be in nature and move into a world that idolizes Capitalism and consumption of the earth's resources without taking into consideration the devastating effects it can have. Bright and shiny objects become our new reality as we ignore our natural environment. Our society tells us that the more we purchase, the more happy we will be. We too, can have paradise if we just buy one more appliance, one more pair of shoes, another ring to fit our fingers. Why view mountains, canyons, and oceans in person when we can just see it on a high-definition screen?

Posted by lesley environmental arts class at 8:57 AM No comments: 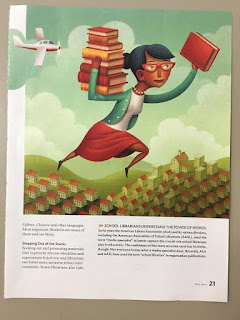 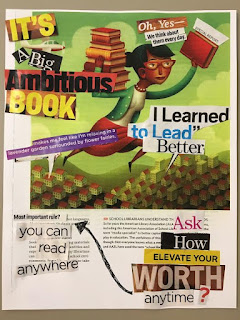 I changed the narrative of the image. Truly showing that no one understands what is done in this occupation. That rather than having people from the below homes look out, which would suggest curiosity or mild appreciation, there is no one. This educational hero helps through the decades in schools, towns, and cities a like. The quiet homes suggest there is no appreciation in the work of librarians. The original text has them identified as valued, but no one knows what they do or shows open gratitude. Books are necessary for information and imagination-- and the sometimes overlap of the two. As if to deny your mind the depth of books is to hold it hostage, away from the capacity of discovered potential. I add supposed conversation and comments-- instead of 'Santa' bringing presents on Christmas, she brings books and shares their wonder all year round. This silence isn't because people are watching tv, it is because these people are engrossed in books, or should be.
I remixed to show more community appreciation and support of the essential help and love of books of this position.

Posted by lesley environmental arts class at 8:56 AM No comments: